West Asheville ART routes have some of the highest ridership in the City of Asheville. The City is considering increasing fares and is looking for public comment regarding the proposed increases. There are six drop-in style meetings where you can get more information and provide input. The West Asheville one is on December 3, 2015, West Asheville Recreation Center, 970 Haywood Road, 4:30-6:30pm.

You can attend any of the meetings and can also send comment via email or by sending a letter via USPS mail. See details on all the ways you can provide valuable input in the article below.

The City of Asheville Transportation Department will hold a series of six neighborhood meetings to share information and receive feedback on several subjects, including proposed fare increases for ART (Asheville Redefines Transit).

The last fare changes occurred in 2006 and 2010. The cash fare of $1 was established in 2006 and has not increased since. Fare changes being considered to keep up with the cost of providing service.

Other topics for discussion during the meetings include Americans with Disabilities Act (ADA) discount forms and paratransit Sunday service and eligibility forms.

Any changes to ART fares ultimately need approval by Asheville City Council. Fare changes could be approved by July 1, 2016 when Council adopts its fiscal year 2016-2017 budget. 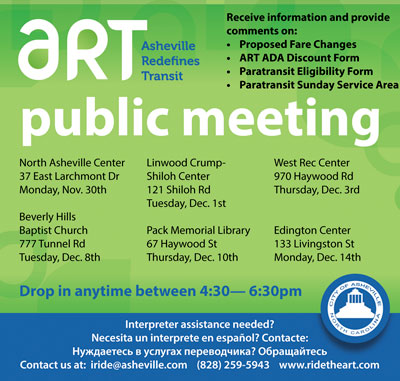 For anyone who wishes to provide input but cannot attend one of these six meetings, materials that will be presented at the public meetings are available online at www.ridetheart.com. Here is a direct link to the survey: surveymonkey.com/transit.

Comments can also be sent by email to iride@ashevillenc.gov or by mail to City of Asheville Transportation Department, 70 Court Plaza, Asheville, NC 28801. Comments will be received until December 30, 2015.

“We know that many people depend on reliable public transportation to get to work, to education opportunities and to get access to health care,” said Mariate Echeverry, Transportation Planning Manager. “The City of Asheville is dedicated to providing this service to our residents. In doing so, we have to consider our ability to pay for the service in the equation. Federal funding helps defray the cost but there are local costs associated with providing ART. And the City’s expenses are rising.”

Other items to be discussed during the transit public meetings include changes to the Americans with Disabilities Act (ADA) discount forms and paratransit Sunday service and eligibility forms.

The new ADA forms aim to make it easier for eligible individuals to receive a 50% discount on the buses. We have expanded the list of professionals who can submit a verification letter. We’re making it possible to submit the application in multiple ways, including by email.

In terms of paratransit eligibility, the new process is more formalized, and now includes a verification letter that can be completed by a wide array of professionals. Again, the City is making it possible to submit the application in multiple ways, including by email.

ART (Asheville Redefines Transit) has 5,000 passengers per day. That adds up to 1.45 million rides per year. At the request of many passengers, the City added Sunday service this year.

ART provides service from its 650 stops 5:30 a.m.-10:30 p.m. Monday through Saturday and 8 a.m.- 6 p.m. Sundays and holidays (service to UNC Asheville and Warren Wilson College operates until 1 p.m. on certain days; see schedule for details). It provides 30 minute frequency on all the major corridors within the City. Our routes serve main destinations, such as UNC Asheville, A-B Tech, Mission Hospital, medical parks, public schools, Grove Park Inn, grocery stores, VA Medical Center, City and County recreation facilities, Biltmore Village, Asheville Regional Airport and Warren Wilson College and extend to the town of Black Mountain. The number of residences in the city that are within one quarter mile of a transit route is about 73 percent.

Where to get more information

For questions about the meetings or proposed fare increases, call 828-259-5943 or email iride@ashevillenc.gov. For information about ART, including route information, visit www.ridetheart.com.